A lot of people have asked me about digital converter boxes, HD TV tuners, and DVRs, and where to get them for cheap.

How about a device that does all that, and costs under $50?
What if you could also play videos from USB devices, too?

The iView 3500STB does all that!
Check out all these outputs on the back panel: 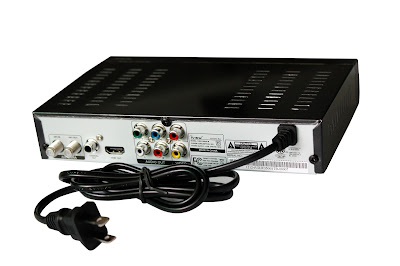 Yes, it has HDMI, composite, component, coaxial SPDIF, analog audio and RF outputs! Okay, so it's a cheap Chinese device, and it suffers from some of the same problems most cheap Chinese devices have. A tiny remote, bad interface and some firmware bugs. But, c'mon, it's $40!!! That's even cheaper than any other "converter only" box - even iView's own boxes. It's not perfect - but fortunately, they seem to be releasing new firmware to fix some of the bugs - and it's HUNDREDS of dollars less than the next-most expensive DVR solution, the Magnavox series of DVR / DVD recorders with tuners. Note that the Magnavox units are not HD, and they have their own set of problems.

Here's the Pros / Cons of this device:
Pros:
1. Price (what else can you say here)
2. Power consumption; less than one watt off and 7 watts on,
3. HDMI, component, composite, and coaxial digital audio out. Better than many others costing 4x the price. (It also has RF output for older TV's),
4. Front panel power and channel up/dn,
5. Especially suited for smaller TVs in bedrooms and kitchens due to it's very small size.
6. This will power a 2 1/2" Laptop type of hard drive in an external enclosure WITHOUT a separate power supply,
7. Lightning fast boot time of 10 seconds. Surely beats TiVo's boot time after plugging in (5 1/2 minutes),
8. Fast channel changes, a rarity with digital tuners especially with DVR's,
9. Ability to add (and completely delete) channels without doing another full scan. In fact, you can skip the initial scan and just enter only the physical channel numbers you want,
10. Picture quality and OTA reception are on par with most other tuners and DVR's
11. Using a USB hub allows access to multiple HDD's up to 1 1/2 TB each. The manual only states drives up to 500GB,
12. The Multimedia player portion allows playing audio files when viewing photos (as long as they are on the same drive).

Cons:
1. When a weekly recording is scheduled, the next recording will be 12 days later, not seven. And "Daily" recordings DO not record daily - the first recording is correct, but the next recording will be 6 days later. This is a major bug that still has not been addressed in a beta firmware update!!
2. No ability to scheduled a recording directly inside the Guide. You have to do a manual entry, VCR style which defeats the purpose and convenience of a guide. This is a real shortfall as all other DVR's will schedule the recording by just pressing Ok/select or Rec button, Fixed with beta firmware updates available on AVS Forums.
3. QAM channels all get listed as "0-0" making it difficult for CATV applications. There is no analog cable orA capability,
4. Bright display. Surely can't use it in a bedroom at night, but you can cover it with tape if it annoys you.
5. The very small size doesn't allow it to be placed under any other equipment. There is also the probability of heavy cables pulling it off the shelve due to lack of size and weight,
6. The remote is even smaller than the box, and so are the labels and buttons. Very hard to see and push buttons. The button layout is not logical either - but you can replace it with a learning remote.
7. There is no indication on the display of recording status. Nothing preventing it from getting turned off, which will cancel the recording,
8. The manual misses a lot of functions. It's too small to read (though you can download a full size manual off their website)
9. No skip function, only fast forward 2x-32x
10. Clock can not be set manually. If the reference stations clock is wrong, you can't do anything about it. Also it is only a 24 hour format,
11. You can't playback and record at the same time, because (see #12)
12. Only one tuner,
13. The single USB port is on the front panel. While Ok for a memory stick, it isn't pretty for a HDD connection with the cable hanging off the front, but it does work.
14. Channels numbers in the display and in the 'TV list' are just consecutive numbers starting with the lowest virtual channel number and ascending upwards. What on earth were they thinking here? This is the other serious shortcoming, Fixed with beta firmware update
15. If you set a recording to span midnight (one day to the next), the system won't allow setting any other recordings and will just continue recording from the start time - until you stop it manually or run out of storage.
16. There is no mention anywhere other than in the system information screen that this has a ATSC tuner, only QAM. there is also little mention about the recording capabilities.
17. There is no "." or "_" button for entering digital subchannels.  Fixed with a firmware beta update that swaps buttons, but now the remote will need an overlay for the new button layout.
18. it will only display 11 events in the EPG, and it sometimes locks up while in the EPG

So, with all these problems, why do I still like this PVR?  Because:
<1> Regular beta updates have been forthcoming over at AVS Forum, and
<2> You really don't have many other viable options for a digital OTA video recording device.
If they would just fix "con #1", I could live with all the rest of the problems with this little box.

You can learn more over at AVS Forum, and download beta firmware updates, on the iView 3500STB owner's thread:
http://www.avsforum.com/t/1465875/iview-3500stb-dvr-tuner-owners-thread


*** Update***
The price on Amazon has gone up*. Also, another similar recorder now available under the "Homeworx" brand. The HomeWorx HW-150PVR has a different (better) remote - therefore, it can not use the same firmware, although Homeworx has released its own update, v10. It reportedly fixes a majority of the bugs that have been reported with both of these boxes, and until iview fixes the problems in its firmware, I am recommending the Homeworx PVR. The Homeworx PVR does not do QAM, however.
It's inexpensive, and Amazon has a liberal return policy. How can you go wrong?

Posted by Cheap Sniveler at 7:21 PM