My daughter needed a laptop for college. Walmart had a Compaq for $179. We decided we could buy it and ship it to her for about $200+.

I spent over 2 hours in line Walmart Thanksgiving  night. My wife spent 2+ hours in a different Walmart, both trying to score the same $179 laptop. We arrived at the stores at 8:30 pm. Of course, we didn't get one. They only had less than 30 per store and started passing out tickets for them @ 6pm - for a 10pm sale! Dejected, I went and stood in line for the $279 HP laptop for 1.5 hours. And waited. And sweated. And then waited another half  hour in line to get to the front of the line, get handed a box, and pay for it. An obvious "Bait and Switch" as they had tons of the more expensive ones!

Over 2 hours, for 2 people, each with a young child, to get the laptop we didn't want.

The next morning I searched the net and found a Lenovo with the EXACT SAME SPECS for $199 and free shipping on an Amazon lightning deal. Yea, I paid sales tax because she lives in NY, but they ship it to her for free. I didn't have to leave the house, and I don't have to spend over $30 to ship it to her and insure it. I spent 30 minutes, in my pajamas, with a cup of hot coffee. I shopped 5 stores in a half hour.

I am going to Walmart and return the unopened laptop today - after the the stupid, smelly, and rude Black Friday shoppers leave. Bite me, Walmart, Best Buy, etc. I will never step foot into another B&M store on Black Friday weekend again. 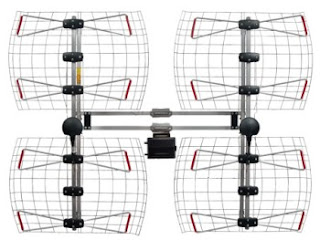 Antennas Direct DB8e: The Next BIG Thing in TV Antennas.

Posted by Cheap Sniveler at 11:30 AM No comments:

If you have a TV or device that uses TVGOS (TV Guide On Screen) you are about to lose your program guide. ROVI, the creator of TVGOS, has announced the end of the service.This is a post from AVS forum on the subject:

I received a reply from KNME:
"Mr. Meyer,
We were instructed by the distributor for TV Guide to disconnect the
equipment which distributes the TV Guide information last week. For more
information, you may contact them as follows:
Call Gemstar/Rovicorp Consumer Electronics Product Support at 800-386-7380.
Email can be sent to ce_customer_support@rovicorp.com.
Thank you for writing and thank you for watching New Mexico PBS."
Looks like most of New Mexico will no longer get TV Guide.

I called the above phone #. The engineer I talked to confirmed that TV Guide is being discontinued. Approximately 20% of markets have been terminated as of Nov. 1st and the rest will be discontinued over the next 6 months!

Note that TV Guide itself is not being terminated, just the ROVI provided TVGOS.

Now, what are you going to do if you have a TVGOS device? Too bad a lot of channels don't use their PSIP, or under-use it. PSIP (Program and System Information Protocol ) is the program data transmitted by the TV stations themselves, using a small bit of their bandwidth to provide program listings for free. Some channels populate their guide out several days and include program details (PBS stations usually do it best), but most only go out about 12 hours with no description. The worst stations are the minor players, like LP stations. You're lucky if they display the station name / network, let alone program info.

Funny thing is, most cheap converter boxes have a better program guide than even the most expensive TV sets. (That's why my DTVpal converter is hooked up to my 52" HDTV!) Now, if $50 converter boxes can have a guide, then why not a $1000+ HDTV? It would only add about a dollar or two to the price of a new TV.

A couple work-arounds for no program guide: 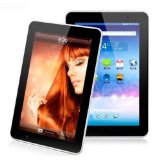 computers. Many manufacturers and sellers have jumped on the bandwagon this year to cash in on the popularity of the Apple iPad

and Nook Color. A quick search turns up literally hundreds of devices ranging in price from about $50 on up, and B&M stores are pushing inexpensive low-end tablets in their Black Friday sales this year. Unfortunately, many of these budget offerings fall short in at least one, if not multiple, areas.

So, what can you expect from one of these low priced tablets, and what can you do to avoid getting stuck with a useless tablet / paperweight? Face it, when you're looking for a device for under $200, you're going to accept some compromises. So the first thing to ask yourself is - "What is most important to me, and what limitations can I live with?"
READ MORE >>
Posted by Cheap Sniveler at 8:10 PM No comments:

Remember, that's PACIFIC TIME. No details yet, but I'm in for a new bedroom TV!

Sold out in under 5 minutes. I missed out, too. Sorry!
UPDATE!
It's on again at Amazon, 3pm today,

Try again, anyone? it's from 3-4 pm PST, but since yesterday they were gone in 5 minutes, I expect the same thing to happen today.

Posted by Cheap Sniveler at 12:51 PM No comments:

The plan is for several short episodes to be streamed online. If the show is successful, these short segments would be combined into a single episode. There are going to be 10 of these short episodes, and each runs a very short 7-10 minutes.

You can watch the trailer here:


and the first installment is here, after the page break: