Does OTA TV have a Program Guide Like Cable? ( YES, it does! )

READ MORE >>
Posted by Cheap Sniveler at 1:15 PM No comments:

Be Prepared: A TV for Use in Power Outages and Emergencies. 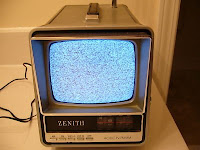 Q: Will my old portable DC TV work after the digital transition?

I was recently asked this question, so I set about doing some research about what options are available if you need a TV for use on a power outage.


A: Do you mean, an old analog portable - battery operated - TV? The short answer, in most cases, is NO.
However, do have a number of options that will get you TV in an emergency, even when nobody else has power or TV. You can even get that old analog TV to work if you have time (and money) on your hands.
Read on...

Sometime on weekend of January 8, 2011 , KUEN-TV 9 - broadcasting on Cache County Translator K46JK-D disappeared. It's still down as of today, 01/12/11, with no services and no signal. But I think I have a clue: I now have 3 instances of channel 5, KSL. One is the original KSL 5 signal from Mt. Pisgah, and one is from the Franklin County Translator District. And now - there's a third. I am assuming - because as usual, nobody here knows anything, so I am making this up as I go along - that somehow KUEN's translator got switched over to broadcast KSL's signal. I have also been having issues with FOX13's signal breaking up, both on the Cache and Franklin transmitters. The problem is more pronounced on the Cache translator, rendering it unwatchable at times. I will try to contact the county about this, but I don't expect them to be of much help. I'll let you know if I do get any information.

UPDATE: I did a rescan on my TVs on 1/18/2011, and channel 9 is back up, after a one and a half week outage. And nobody at the County offices could tell me a thing about it.

Posted by Cheap Sniveler at 6:18 PM No comments:


SALT LAKE CITY —
Coming Wednesday, FOX 13 will air "Antenna TV" so viewers in the area can view classic American television shows.
It will be a step back in time for nostalgia t.v. viewers. Benny Hill, Three's Company, Sanford and Sons, these are some of the series titles Antenna TV viewers can see starting at 1 p.m. MST Jan. 5.
"It's all about family friendly television," says KSTU FOX 13's General Manager, Tim Ermish. Ermish says that although Antenna TV in not affiliated with FOX, it is a digital sub-channel that KSTU got licensed to air.

The cost? Antenna TV is free for cable subscribers.
For Comcast subscribers the channel will be 1-06 and will switch to channel 1-1-1 Jan. 20.
Other cable providers will have Antenna TV on channel 13-2.

Notice no mention in the print article that it's also FREE OTA with an ANTENNA, what? And if you have satellite, you can add an OTA antenna to your dish setup and get not only antennaTV, but a bunch of other channels you can't get on cable or satellite!

Posted by Cheap Sniveler at 7:24 AM No comments: