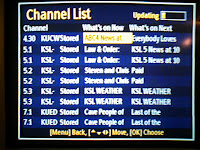 
I realize that most channels with bad PSIP data are independent and/or LP stations, and I thank the "Big Guys" for doing at least a passable job with their PSIP data. But all stations should consider that PSIP data is invaluable to many of their viewers and also encourages viewers to plan their viewing so they can watch YOUR channel and YOUR commercials rather than another channel that has PSIP data. Also it allows those of us with PVRs to record YOUR programs and commercials rather than watch another station's programs and commercials.

Here is what I consider to be important PSIP data:

We really don't need all the extended EPG data ("On tonight's episode, Mary Lou..."). Yea, it's nice, but not essential. PBS stations in general make good use of their PSIP, followed closely by the major network affiliates. Independent and LP stations are lucky to get their own call signs correct. Ironically, LP and independents benefit most from a good EPG, since their listings are often not found on sources like TitanTV, and many OTA viewers (mostly older viewers) don't have access to TV listings on the internet.

Since the demise of TVGOS (TV Guide On Screen) and the weekly TV book that used to accompany most Sunday newspapers, along with the slowly growing number of OTA PVRs, PSIP/EPG information is becoming more important than ever.

Posted by Cheap Sniveler at 9:41 AM